One of our long-time volunteers for FIRST Canada, Jim Forbes who works at DXC  has been able to donate laptops to several library groups over the years (Richmond Hill, Aurora, Newmarket, Stouffville).  Libraries have used them to provide FIRST programs in their local areas for FIRST LEGO League Explore students. A variety of FIRST teams and schools who were in need were also provided with laptops. These have included Waabagon Gaming First Nations school on Georgina Island on Lake Simcoe, Sutton High and their FIRST Robotics Competition team 6514, Sutton Public School, Blackriver Public School, St. Bernadette Catholic School, Morning Glory PS, Our Lady of the Lake CHS, Prince of Peace CES, St. Mother Teresa CHS and its FRC team 6140. DXC employees have been engaged in also running the FIRST LEGO  League Qualifier event in Ottawa for a few years now and organizing the “Challenge Set build sessions” with DXC employees to support tournaments in Ontario.

Through the donation of technology from DXC, we have been able to impact more students. Paul Keenan, a FIRST Senior Mentor has been championing the effort and connecting with schools and communities to help them with their technology needs. 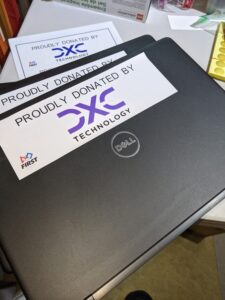 “I even met a team at an FLL provincial event in Waterloo a few years ago who were having issues with their laptop. I had a couple there so I lent the coach one for the day. When she returned it she said the broken one was the only one that the team at the school had for the team and it was going to be hard to get another one. Instead of taking the laptop back, I told her

to keep it. She was incredulous but that is why DXC gave them to us in the first place.” says Paul Keenan, a FIRST Senior Mentor with FIRST Canada

FIRST Canada has also supported a team in need from an area near Windsor that otherwise would have struggled to find one. There are many teams and groups that received laptops through this program.

“One of the first ones and one of my favorites was the Classy Cyborgs of Aurora. They had very old devices and these ones enabled them to do wonderful things with their World Class project. You can read about their journey here” – Paul Keenan, a FIRST Senior Mentor with FIRST Canada

The laptops recently received from DXC are being used to support a new summer camp initiative by FIRST Canada. The aim of all the camps is to reach underserved, underrepresented children from grades 5-9. Some of the students may have limited access to devices that would be needed to access the coding environment. We have FIRST Robotics Competition teams running camps and while some may be able to support them with devices, we also have teams running camps who are part of those same communities and will not have the resources to provide devices for learning. That is exactly where these laptops that were “Proudly Donated by DXC”  (as the sticker says) are going. In addition to the teams running camps FIRST Canada Interns and youth council members are running camps as well. Some of these are in English and French and are also serving underserved communities such as black youth and Indigenous groups. We are grateful for the support we have been receiving from people like Jim Forbes of DXC!

Such is the impact of the donations of DXC! Thank you DXC for your continued support in providing technology to those in need!