Sarah has been supporting the FIRST Community for the past 12 years. Learn more about what she does both inside and outside of FIRST! 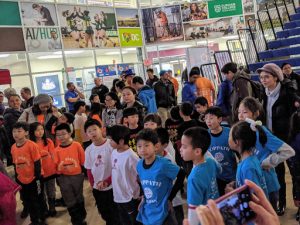 Q: What is your role as a FIRST Senior Mentor(FSM)?

Sarah: I aim to support FIRST coaches, mentors, team members, alum and volunteers in the Greater Toronto West area. I support all the FIRST programs and really believe that offering FIRST for all ages is awesome. For example, I worked as a judge listening to FIRST Lego League Explore teams at last year’s FIRST Tech Challenge Provincial Competition.

Q: What sorts of responsibilities do you have in your role?

Sarah: In normal years, I would visit teams, encourage potential new team, attend outreach events, volunteer at competitions and generally try to support FIRST wherever possible. This year has been a little different as we have moved many activities online. So this year, I helped develop our CanCode Virtual Summer Camp, I am producing the second season of FIRST Canada Live and I have helped produce the FLL and FTC kickoffs. I’m super proud of how FIRST Robotics Canada has adapted to a more virtual world while maintaining the excitement and connections of our awesome community.

Q: What do you do outside of FIRST?

Sarah: I have recently retired from teaching, so have taken up recording audiobooks as a side hustle. I’ve always loved reading aloud and enjoy creating different voices to bring books to life. I’ve completed 5 books so far and found learning how to do the sound editing to be the most challenging part.

Q: What is the coolest experience you have had with FIRST?

Sarah: One cool thing was at the first FRC competition in Calgary. There was a guy, Herman, who showed up as the only team member from his rookie team, Trappers, that was struggling to finish the season. His mentor, Mr. MacIssac, was there to support him and everyone at the event leaned in to make it a great experience for them. People helped Herman rebuild the robot which had been damaged in shipping, people got team shirts for them, FIRST HQ made an exception to allow other team members to be on his drive team since he couldn’t do it alone, and when his team got picked for alliances the crowd went wild. The team won a judge’s award and took back the passion and excitement of FIRST to their remote home community. Now Fort McMurray has a strong FRC team, 2 FTC teams (including an all girl’s team) and a few FLL teams. That FIRST community in 2013 paid it forward to make a difference for so many kids in the future. I love that!

Q: What are some of your hobbies?

Sarah: I love the outdoors and go for walks daily. I also love curling. When I started more than 10 years ago, I didn’t know how much strategy was involved and how much depends on all members of the team. Sounds like FIRST doesn’t it? Only, on ice.