FIRST Robotics Canada has a lot of amazing volunteers who work countless hours behind the scenes to keep our events running smoothly. We’re introducing some of them in a series of volunteer profiles. Thank you to talented writer and FIRST alumna Emily Haws for interviewing and writing this series.

Being a referee can be difficult⁠—the weight of a team’s success is literally on their shoulders⁠—but Mikaela Corneil finds FRC more fun when it’s stressful.

It takes Mikaela a few weeks to learn the rules of the new game released every year, she said, writing them out by hand in order to cement them into her brain. She makes a table and divides them by penalty, making sure she has them down  before the official referee training begins.

She then reviews that chart a few times before a competition starts, and she’s ready to go.

Unless Mikaela (Miki) can point to a specific rule that justifies her decision as a referee, she doesn’t make the call.

“If I can’t point out a rule in the rulebook, and encourage the students to understand why I’m making that call, then I shouldn’t be making a call,” she said.

For the 2019 FRC season, Destination: Deep Space,  Miki refereed at several district events, including being head referee at the North Bay District. She was also part of the referee team at the Ontario District Championships, held in April at the Paramount Fine Foods Centre in Mississauga. Due to the high level of competition, referees there are the only ones qualified to be the head refs at the district events. Earlier this year, she was a referee at the Ontario East FLL Provincial, and volunteer coordinated at the West championship.

If she looks familiar to you outside of being a volunteer, it could be because she’s featured on the FIRST Canada trailer. 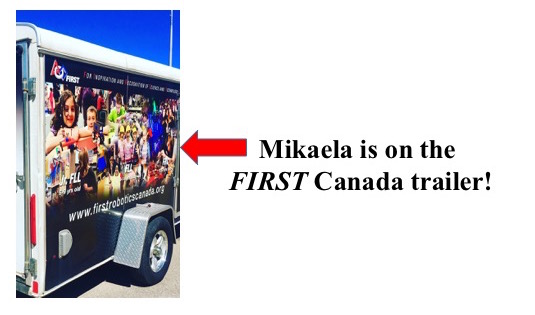 Mikaela’s sister originally dragged her to a robotics meeting in 2011 when she was in grade 10, she said, likely because she was interested in engineering, while her sister was more involved in the arts. They both participated on the team together.

The team has since been disbanded, so when asked Mikaela usually says she comes from the W.A.F.F.L.E.S. Community Robotics. W.A.F.F.L.E.S. gave her some of her first volunteer experiences, and she ended up mentoring the team for the 2013-14 season.

She did a bit of everything while a student, but mostly, she was in charge of the electrical components of the robot. It’s had a direct impact on the rest of her life.

“Initially in high school, I wanted to go into mechanical engineering, but because I was in charge of all the electrical things on my teaching, I didn’t want to let electrical go,” she said. “So then I chose mechatronics at the University of Waterloo.”

Mikaela graduated in 2018, and now works as a space systems electrical designer in Toronto. She added she stays involved in FIRST because she wants to ensure the program is there longterm.

“It also helped me grow as a person and got me through some difficult parts of my life,” she said. “I want to make sure that those opportunities are there for other students.”

Her volunteering resume is extensive. Starting in high school, she’s worked as a referee and volunteer co-ordinator at the FLL and FRC levels, and also helped judge and organized FLL Jr. events. She moved to be a head ref two years ago, she said, and has also refereed at the World Championships.

For her efforts, she received the Volunteer Appreciation award at  the Waterloo District in 2018 and the Volunteer of the Year award at the Western Ontario FLL Provincials in 2018, among others.

Like most FIRSTers, people are at the heart of her favourite moments⁠—it’s the community feel that keeps her coming back to competitions.

As a student, one of her favourite memories was when the team was heading back from the Montreal regional.

The team had to pull into a gas station off the highway somewhere between Montreal and Kingston because the wind was threatening to break the top off the robot in the back of the truck.

As a volunteer, she laughs at the time she got spray paint up her nose at the 2017 Western District Event, because the field was held on a hockey rink with boards over top of the ice. The cold made the tape freeze and not stick⁠—hence the spray paint.

“Now there’s a designated iron and extension cord in the field kit that goes to half the Ontario events specifically for the Western, to iron the tape onto the field,” she said.

The car rides home from the mentors after meetings also stand out to her, she said.

“There are always so many memories with a team,” she said.

Email communications@firstroboticscanada.org if you have a recommendation of a volunteer to highlight!