FIRST Robotics Canada has a lot of amazing volunteers who work countless hours behind the scenes to keep our events running smoothly. We’re introducing some of them in a series of volunteer profiles. Thank you to talented writer and FIRST alumna Emily Haws for interviewing and writing this series. 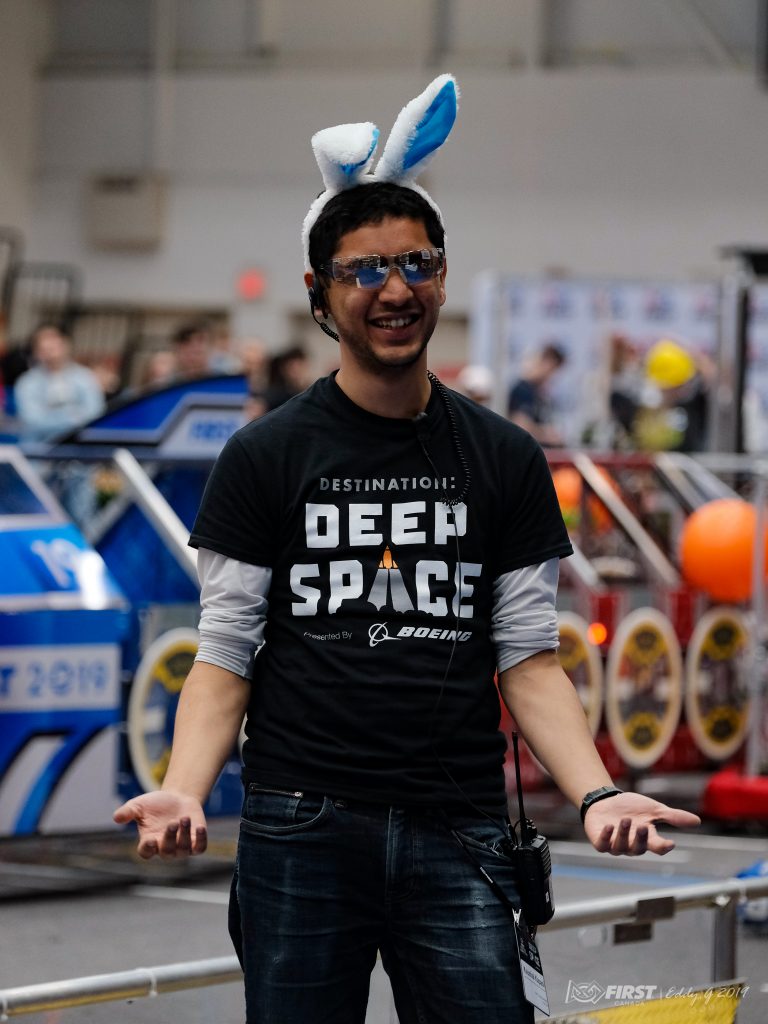 Some say that home is where the wi-fi connects automatically. For Kaushal Kapasi, one of those places is FIRST headquarters in Manchester, NH.

So far, he’s been there four times, starting in 2015. Several key volunteers fly down each season to be trained on the affiliated game, which allows the game to be administered consistently around the globe.

He has travelled three times for FIRST technical advisor (FTA) training, and once as a lead robot inspector. The FTA is responsible for making sure the competition runs smoothly according to FIRST requirements.

“It’s a little bit overwhelming, in a way,” he said, of the trips. “But Frank Merrick, the director of FRC, he’s always been there and he’s a really great person to talk to. You can see how much he cares about the teams and the volunteers as a whole experience. He is our go-to person when we have questions, and meeting him and getting to interact with him—every time is a treat, but the first time was extra special.”

“Making the trek is always a bit of a magical experience. but the type of magic shifts over time. A robot showcase is one of the first things to see when one walks into FIRST headquarters,” he said, and Team 254’s robot from the 2014 season will be forever etched into his memory.

“The robot actually had three of the game pieces,” he said. “The Cheesypoofs were one of the few teams—maybe even the only team—who could hold all three pieces at the same time, and they had the robot set up in that configuration.”

Like many volunteers, he says the thing that keeps him coming back to volunteer is the FIRST family. Stay around long enough, and one will come to realize that events double as family reunions.

“You meet not necessarily the same group of people, but there is some overlap in who you meet year after year,” he said, which is true of going to FIRST HQ or Ontario events. “It’s ‘hey, nice to see you again’ you spend 20 minutes or a half-hour catching up with someone you haven’t seen since last year’s championship.”

Having graduated fromFIRST Team 1241, THEORY6, in 2009, Kaushal just finished up his 12th season with the program. He was on the scouting and software teams as a student. It led him to pursue a mechanical engineering degree with a specialization in mechatronics at Ontario Tech University, formerly known as the University of Ontario Institute of Technology (UOIT).

He now works as an IT architect for TD Bank, where he designs IT software.

Both on and off the field, he’s well-known for being one of the most welcoming members of the FIRST community, and can often be found checking in with new volunteers to make sure they’re having a good time.

“If you’re not having fun, or you see someone else who’s not having fun, come talk to any key volunteer. They will help you figure out what’s going wrong and make your experience better,” he said. “Don’t be afraid to ask questions, because everyone’s there to help.”

Along with being an FTA and a lead robot inspector, Kaushal has been a scorekeeper, referee, and volunteer coordinator, who organizes all of the other volunteers. He was present at five district events in seven weeks this year, including Durham College, North Bay, York University, Ryerson University, and the Ontario District Championships in Mississauga. He’s also been extensively involved in FIRST Lego League, volunteering as a judge, referee, and eventually head referee.

Overall, one of his favourite FIRST moments was being the volunteer coordinator at the Greater Central Toronto Regional (now district event), which is held at Ryerson University. He was recognized as the event’s Volunteer of the Year in 2016.

“The role gives you an idea of how much work it takes to run an event,” he said. “Then you have the ability to jump in and help out where ever it’s needed.” 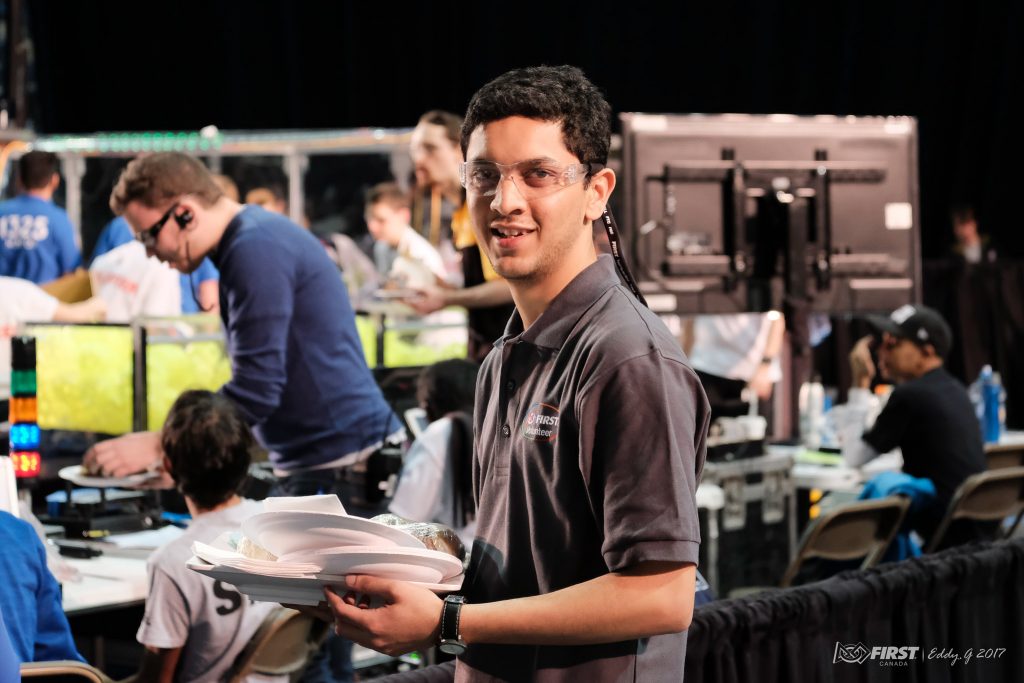 Food is one of the key elements to making the volunteers keep coming back, he added. He’s known to love the cheesecake served at the North Bay event so much that he once brought a full tray home to the hotel with him one night, and brought it back empty the next morning.

“The tray was taken with permission from the district planning committee,” he added with a smile.

Mentorship: The Guiding Star – An Interview with Emily Chung