FIRST Robotics Canada has a lot of amazing volunteers that work countless hours behind the scenes to keep our events running smoothly. We’re introducing some of them in a new series of volunteer profiles.

If there’s a last-minute behind-the-scenes problem at one of the Ontario FIRST Robotics Competition events, there’s a good chance Alex Wilcox is fixing it. 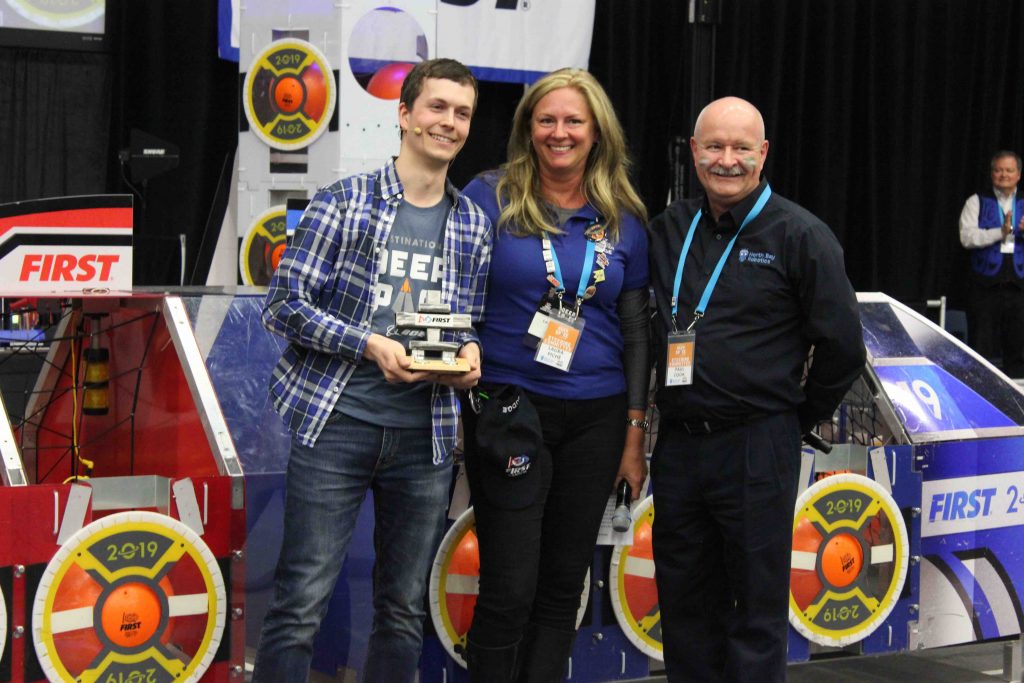 A logistics master who revels in organizing and packing, Alex just wrapped up his 12th season with FIRST Canada where he attended five events. He joined FIRST Team 1305, Ice Cubed, on his second day of grade nine.

“1305 definitely has a picture of me driving an FTC robot back at Grade Eight Day at Chippewa Secondary School,” he said. “I remember doing that, in that room off the library.”

He’s held a variety of roles during events, including FTA assistant, field supervisor, and emcee, and is often given more roles as needed, such as team load-in.

He started volunteering for the North Bay District Event in 2014 (it was a regional then), but became more involved with multiple events in 2018 as a key volunteer.

“Solving challenges is what attracted me to FIRST in the first place,” he said, but it’s a different set of problems as a volunteer. The FIRST family is what keeps him coming back, and the thrill of teams enjoying a successful event.

“Robotics is something different,” he said. “It gives people the opportunity to compete and travel, while not being a sport…If you’re not on a sports team, your options to go compete somewhere are pretty limited.”

Alex’s first role on 1305 was safety captain—a role he still specifically gives to a young student on whatever team he’s mentoring—but he’s done pretty much everything else. From chairman’s presenter—one of a small group who does a presentation to judges about their team’s community impact for the most-coveted award—to drive coach, his five years on the team shaped 1305’s team culture in ways that still run true today. One of his most iconic projects was 1305’s pit, which was unveiled in 2011.

In 2012, he won the Dean’s List Finalist Award, and has since picked up the 2014 Ontario Volunteer Service Award and this year’s North Bay District Event’s Volunteer Appreciation Award.

He is currently studying to be a civil engineering technologist at Algonquin College in Ottawa, where he’s grown the FIRST program substantially. He’s the founder of the Carleton University FIRST alumni and mentoring association, mentors a local team, and is organizing the upcoming Carleton University District Event.

One of his proudest FIRST moments was when he spent fall 2011 coaching an FLL team of children on the autism spectrum—who was awarded the regional project award.

“That was new to me, but it was a really rewarding experience,” he said. “We managed to get all ten of these students—which is an incredible feat on a good day—but we managed to get all of these students with special needs to come together and do this five-minute presentation…and work as a group, and treat each other with respect. And when they got it down, it was great and it won them the award.” 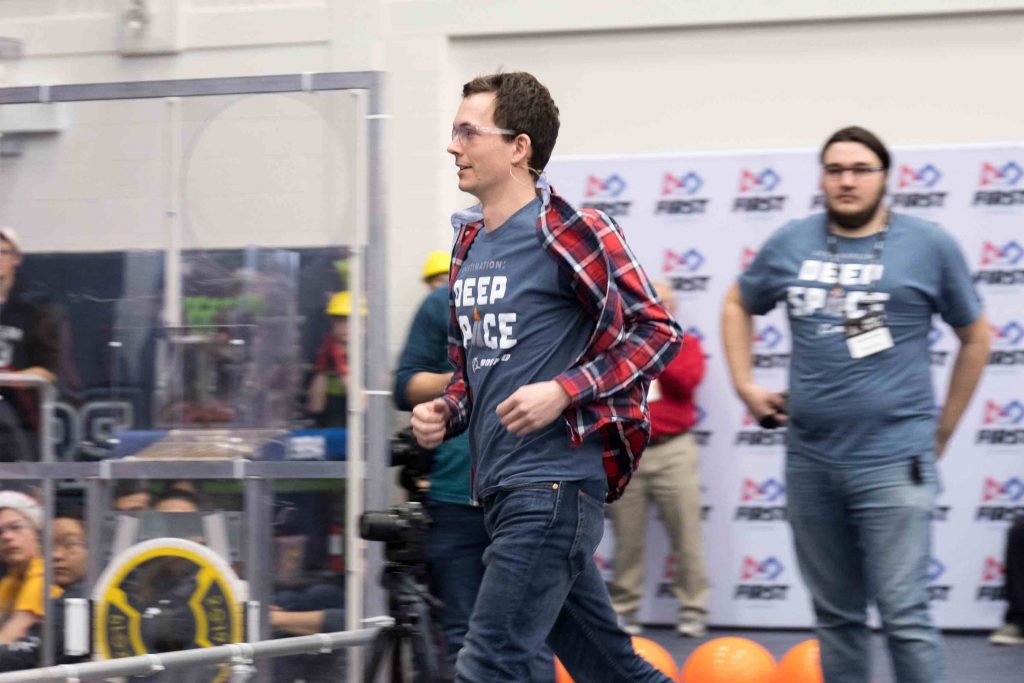 From tracking down a stolen FRC trailer to sprinting on field to accept an award, Alex is always on the move

Another time, he participated in a police chase over a stolen FRC trailer. After taking an unusual route through a sketchy Atlanta neighbourhood back to the hotel at the 2010 World Championships, Alex spotted something familiar: another team’s trailer.

That team happened to be at the same hotel, and were panicked in the lobby when 1305 arrived. Alex hopped in the back of a police cruiser with a mentor to find it, and the ordeal ended with the police pulling out their sidearms.

“It was a sketchy junkyard,” he said, adding that nobody was hurt. “That won us the Gracious Professionalism award in Atlanta.”

Overall, his advice to new FIRSTers is to get involved—try out every aspect of a team or an event, he said. There’s a lot more to volunteering than field reset, and the more experienced volunteers are always willing to teach those who are new.

“I’m still learning, even when I think I know what I’m doing,” he said. 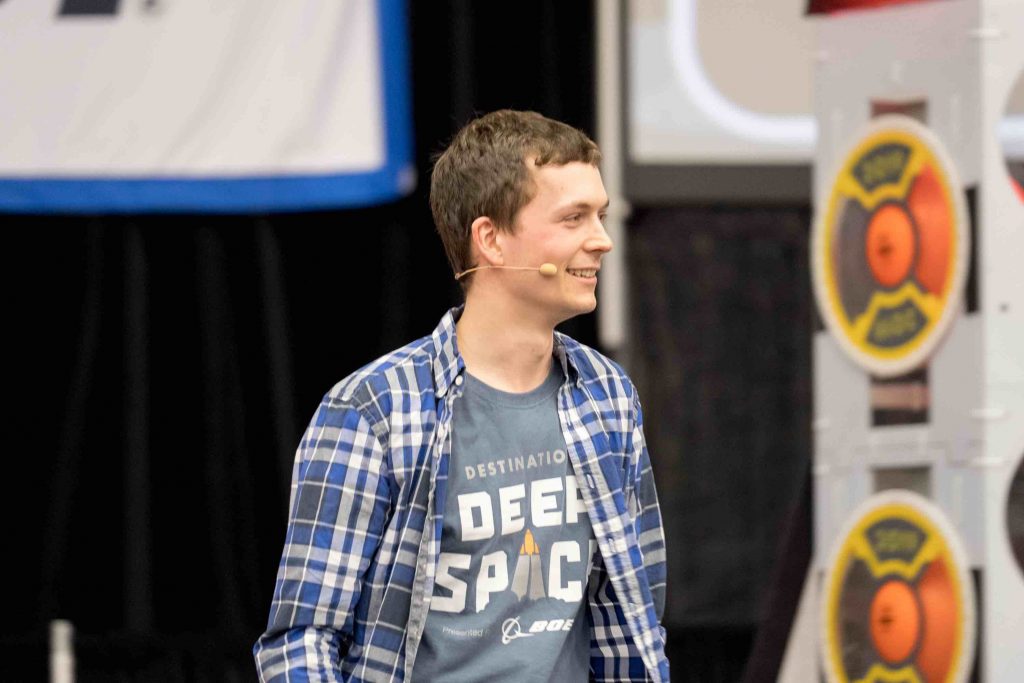