March 8 is International Women’s Day. And to celebrate, we want to share five of our favourite keynotes from women in STEM.

Was it hard to narrow it down to just five? Absolutely. Because, as we’re sure you’ll agree, the fields of science, technology, engineering, and math are full of intelligent, innovative, and inspiring women. And yet, there is still not enough representation of women in STEM. There is still not enough diversity overall. Let’s meet some women who are working hard to change that.

Imogen Coe
The founding Dean of the Faculty of Science at Ryerson University in Toronto, Dr. Imogen R. Coe, is also a professor in the Department of Chemistry and Biology and an affiliate scientist with Li Ka Shing Knowledge Institute, Keenan Research Centre, at St. Michael’s hospital. She is internationally known for her scientific research as a cell biologist. Coe is very much a leader in her field.

She is also considered a leader for her work as an advocate, speaking up about the need for more equality, diversity, and inclusivity in science. Listen to her talk powerfully about this important issue—and you’ll understand why she is a trailblazer.

Reshma Saujani
Girls Who Code is a well-known non-profit organization in North America that is working to close the gender gap in the tech industry. Reshma Saujani is the founder and CEO. She is also the author of three books, including Brave, Not Perfect, and has one very big goal: one million women in science by 2020.

Saujani is a huge advocate for women in STEM. Her Ted Talk on teaching girls to stop seeking perfection—and instead, bravery—is incredibly inspiring and well worth a watch.

Kirsty Duncan
Canada’s Minister of Science, Kirsty Duncan, is a politician, medical geographer, associate professor, and author. She is passionate about putting science front and centre on Canada’s political agenda. So she has taken action to improve equity, diversity, and youth participation in the research community. Duncan often speaks out in support of youth, women, and other groups who may be marginalized. She believes in pushing boundaries. In fact, she says that’s what science is all about.

This past spring, Duncan gave a talk about the importance of science—and how scientists must be free to learn, to speak, and to challenge… and even to fail. If you haven’t heard it yet, today’s the day!

Shohini Ghose
Award-winning Professor of Astrophysics, Dr. Shohini Ghose, is also the Vice President of the Canadian Association of Physicists and the Director of the Centre for Women in Science. She works hard to make science accessible for everyone, regardless of gender or background.

When she was growing up in India, Ghose dreamed of becoming an astronaut or a superhero. And while she may not have made it to space (yet), we like to think of her as a science superhero. Why? Because she can explain quantum physics in a way that just about everyone can understand. Not an easy task! And that’s only part of what makes this talk below—and many of her others—so inspiring. Watch her in action as she explains quantum computing in 10 minutes.

Eugenia Duodu
Canadian chemist, Dr. Eugenia Duodu, is passionate about inspiring and empowering youth in STEM—especially those in low-income and marginalized communities. This is why she volunteered with Visions of Science Networking for Learning in 2011 while working on her PhD in chemistry. In 2015, Duodu took over running the charitable organization. She is now the CEO.

Last winter, Duodu gave a talk called “The ‘Unlikely’ Scientist” in which she shared her experience of growing up and finding that very few scientists looked, talked, or acted like her. What she eventually realized? It’s way past time to forget those false perceptions of what a scientist should be. Science “needs her swag.” Yes, it does.

Want To See Even More Women and Diversity in STEM?
Of course you do! So we recommend this great read from FIRST Robotics Canada’s VP of Partnerships, Kim Cooper, called Girls in Science: Voices For Change. 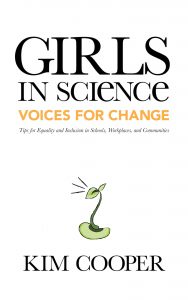 It’s an inspiring book full of fresh ideas to help encourage inclusive and accepting environments for girls and underrepresented groups in the STEM fields. Plus, proceeds of this book will be donated to FIRST Canada’s Equity, Diversity and Inclusivity initiatives.

Take a read, and then send us your ideas for change. We want to hear from you!