Thank you to Microsoft for supporting FIRST Robotics Competition! Throughout competition season, we will get to know Microsoft-sponsored teams. This week we profile Madison from FIRST team 6178 in Moose Jaw, Saskatchewan. Madison shares her experience on the team. 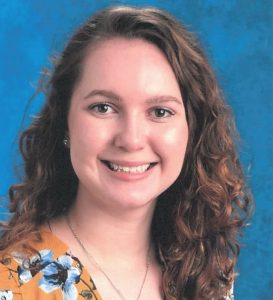 I became involved in our robotics team when I was in grade 9, and have been a dedicated team member for four years now. I had never expected to join the team; when I was a grade nine student, I had no interest in the topic. I didn’t even know we had a robotics team, I mistakenly thought that it was a class students could enroll in.

My joining the team is a unique story that I have only shared with one other student. Mr. Atkins, our team mentor and a teacher at my school, approached me and asked if I would like to attend the FIRST Robotics Competition taking place in Calgary. At the competition, the team was very accommodating. In those few days, I learned so much from all the students involved. It truly kickstarted my love of robotics. The Techno Titans became a home to me, I developed numerous meaningful friendships, as well as acquired various new skills. Being a member means the world to me, it helped me to realize my place in high school that I struggled so greatly to find.

As a female member of a male dominated field, I have definitely had to face barriers. On the team, I often try to take a leadership role; I have been equally successful as unsuccessful in this. The members of my team have been very open to this, however, this is sadly not always the case. No one has ever outright stated that as a woman I am less than, but it is in subtle remarks that I have been hurt. On rare occasions, I have had males talk down to me as if I wouldn’t understand what they were saying. Similarly, I have had men take me less seriously in conversations about strategy or the mechanics of our robot. I find this quite a barrier to overcome because to be taken seriously I have to prove myself further than the boys on the team. Having said this, today I am seeing this less and less. This challenge is something that forced me to become a better leader, and a more accepting person.

Another barrier we have confronted as a team are mechanical and tech related complications during competition. We have never faced a year without hitting a speed bump head on. One year, our robots frame exceeded perimeter limitations and we had to cut 8 inches off, and essentially had to completely redesign the entire robot in 8 hours. Another year, we had communication issues, and spent the whole three days of the competition troubleshooting. These challenges are inconvenient and unwanted at the time, but years later I wouldn’t trade them for the world. I have learned so many essential skills because of these difficulties. I have become a better person, further developed my problem solving, and improved my listening skills because of them.

My favourite aspects of STEM and robotics are the welcoming and encouraging environment of it all. I have never met someone unwilling to help me in times of need, and I have no fears of speaking up when I need help. Everyone provides such kind constructive feedback, and no one’s ideas ever get blatantly shut down. It is such an incredible environment to be part of. Another aspect I love is how applicable the skills I have learned are. Being a member of a robotics team has provided me with so many skills that transfer into real life.

This past year, the Techno Titans has lost almost half of its members to graduation; this year is really a year dedicated to training younger students and helping them build up their skills. My hope for this competition season is not necessarily that we get first place, but that all the new students have as positive an experience as I had in grade nine. I would like every member to leave the FIRST competition with a feeling of pride at what we accomplished, whether it is first or last place. I hope that we all give it our best go, and if we come out with a medal then that is just another bonus.

I believe that it is important for companies like Microsoft to continue to support robotics teams for students like myself. If my school wasn’t involved in FIRST, I would not have had the high school experience I did. Robotics helped me become the young lady I am today. It inspired many of my fellow team members and friends to pursue computer science and engineering in university. FIRST Robotics today is producing the Microsoft employees of tomorrow. Robotics is getting the youth involved in positive, inspiring projects. It is making us think about our futures. Because of robotics, we are shaping the future into what we want it to be, we are taking it into our own hands. Microsoft’s corporate mission statement is “to empower every person and every organization on the planet to achieve more” (Gregory, 2018*), which is exactly what FIRST has inspired me to do; in the future, I will achieve more.

In closing, I would like to reiterate that robotics has shaped me into the enthusiastic student I am today. It has led me to develop skills I never could have imagined, form deep and lasting bonds, and establish relationships with people all over the world. Robotics has become my home away from home.