“FIRST” things first… did you get my lame joke? As comedic as I believe I am, let me give you a proper introduction. Hello! My name is Kim Nguyen, I am an International Baccalaureate (IB) Student enrolled at Glenforest Secondary School in Mississauga, Ontario and I have been involved in FIRST Robotics for 3 years and counting. I joined FIRST as a Student Member of FIRST Robotics Competition (FRC) Team 6070 – Gryphon Machine but have since, also become an active Volunteer and Ambassador for FIRST Canada. Like many students who join FIRST, I had no idea what I was getting into when I started! From being a student on a FRC Rookie Team to picking up 50+ neon yellow wiffle balls for FIRST STEAMworks 2017, I’ve been privileged to meet inspirational people and experience incredible things because of FIRST – like becoming a SHAD Fellow! 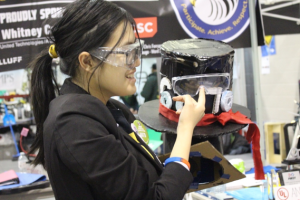 I first heard of SHAD from the multitude of SHAD Alumni roaming my school’s hallways. Coming from a school notorious for having the highest number of SHAD Fellows, it seemed like in the Fall, everyone from Grades 10 through 12 were busying writing their SHAD application. When I reflect now, I was always intrigued by SHAD’s unique experiential learning opportunities but, if you had asked me at the time if I was going to apply, I would have said no (funny enough!). In fact, I only applied to SHAD because I was peer pressured by one of Glenforest’s SHAD Teacher Champion, Ms. Diana Wang-Martin. Thankfully, this was the good kind of peer pressure that I wouldn’t regret! It was around this time that FIRST Canada had also just released some exciting news – for the first time ever, FIRST Canada would be partnering with SHAD to give one lucky FRC participant a full scholarship to attend SHAD. From stories about SHAD, I knew it would be a costly endeavour if I was accepted to go. Yes, my parents were supportive of me applying but being a lower middle-income family who already had to face the costs of IB and FIRST Robotics, the idea of adding another heavy burden was uneasy. Nonetheless, with the support of my family, teachers, and some self-confidence I gained from being in FIRST, I submitted my SHAD application. I knew in the back of my mind that I was eligible for the FIRST Robotics SHAD Scholarship but, I also knew that I wasn’t the only FRC participant applying so I didn’t get my hopes up. 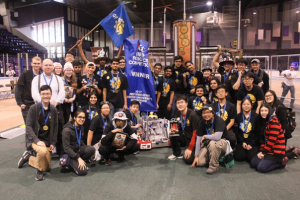 Some months later, when I received a letter stating that not only was I accepted to SHAD but, I was also awarded the inaugural FIRST Robotics SHAD Scholarship, I was flabbergasted. I never could have imagined I would win the scholarship, let alone be accepted in the first place! Luckily, I didn’t have much time to overthink the news because it was the middle of FRC Competition Season! Before I knew it, I was sucked into a whirlwind; FRC 6070 competed in the brand new FRC Ontario District, I was slated to attend SHAD at the University of Waterloo, I publicly accepted the 2017 FIRST Robotics SHAD Scholarship at the 2017 Ontario FRC Provincial District Championships, and then I was heading off to SHAD for the month of July! 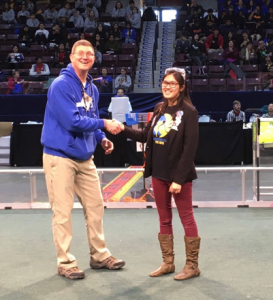 To be honest, the day I arrived at the University of Waterloo for SHAD, I was absolutely terrified. Surprisingly though, I discovered that once everything and everyone settled in, nothing at SHAD felt too different from my experiences in FIRST. Of course, both SHAD and FIRST have their own differences that make both remarkable programs unique but, as a student going from one to other, it never felt like I was making a huge jump. To describe it in an analogy, I was simply crossing a bridge between SHAD and FIRST Robotics, and vice versa. In fact, you’d be surprised how interconnected this bridge was! From workshops and speakers to just the people around me, I always found connections back to FIRST throughout my life changing time at SHAD.

One of my first workshops was centered around DIY Music Synthesizers in which we used Arduino Kits to create our very own musical instrument. The workshop reminded me of the work that the Technical sub-teams (i.e. Mechanical, Electrical, etc.) on my FRC team do. As someone who’s involvement in FIRST is more on the administrative and business side, it was exciting to explore some of the other side of FRC at SHAD. 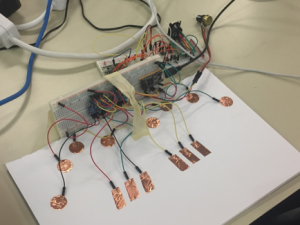 Of course, it wouldn’t be a SHAD Program at the University of Waterloo without a workshop in the Engineering Faculty! Led by an Engineering Professor and two of his students (one of whom happened to be a FIRST Alumni from FRC 2056 – OP Robotics!), I got the chance to take apart a Coffee Machine. In the same building as all of Waterloo’s esteemed Design Teams, we learned about Criteria and Constraints in Engineering, and of course, what was actually inside an Instant Coffee Maker. 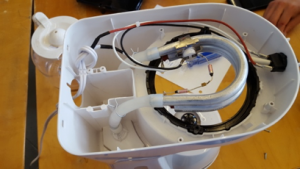 At SHAD, I was incredibly lucky to meet many wonderful speakers. This ranged from Professors at the University of Waterloo to Industry Professionals in Entrepreneurship, Business, Design, Strategic Insight, etc.! One memorable session in particular, was on Cultural Literacy by Quanser’s Chief Education Officer and FRC Judge, Dr. Tom Lee. It was an exceptional lecture, with points on Language, Philosophy and Education, and hearing it from someone I originally knew from FIRST, was just full circle!

A big part of my time at SHAD is spent working on the SHAD John-Dobson Entrepreneurship Cup Project which in a way, can be best described as a really condensed FRC Season. At the start of the program, the SHAD Head Office announces a design question that all SHAD participants will try to solve (very similar to when FIRST HQ announces the FRC Game every year!). Within in each campus, participants are split into teams to come up with their own solution to the Design Question, all under tight deadlines and tough restrictions. Like FRC teams who build their own robot during Build Season!

Something unique to the SHAD Program at the University of Waterloo is that during our final week, we take one day in our schedule to volunteer in the community. I was fortunate to work on a historical farm, helping to tend to gardens of fresh herbs and vegetables. Volunteering with my campus, similar to volunteering with my robotics team, served as a reminder that there is a world outside of the SHAD Program or a FRC Competition and that sometimes, we needed to step back and remind ourselves that the community needed us, as much as we needed them. 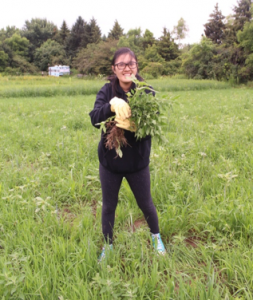 By far, my greatest memories from SHAD and FIRST alike are the people I’ve gotten to meet and connect with. Although SHAD was only a month long, everyone at my campus became a close family. It didn’t matter if you were a participant or a Staff/Faculty member, or which province you came from, everyone supported each other and deeply cared for one another. To go from my FIRST Robotics family to my SHAD family, there was always someone I could lean on and sometimes, it was a person who belonged to both my families. Take for instance, my astonishing Program Director and FIRST Judge, Dr. Rob Gorbet or my fellow FIRST participants, Ethan Childerhose (FRC 1360 – Orbit Robotics), Megan Gooch (FRC 5689 – CK Cyber Pack) and Matthew Beingessner (FTC 12265 – GearHeads). 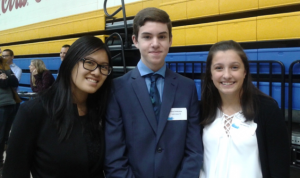 Heading home from SHAD and going back into the world of FIRST, if there is one thing I’m taking from SHAD, it would be to enjoy the journey and not the destination. Remember that FIRST is “more than robots”. As difficult it can be sometimes, don’t forget that FIRST is more than just the competition – don’t focus on learning to be the best or win the next FRC Regional/District Event but instead, learn for the sake of learning. Connect with the people around you and learn from their stories and perspectives because you’ll be amazed how much you haven’t experienced yet!

All in all, SHAD is a place for any student who is curious, passionate and willing to learn – which makes it perfect for anyone in FIRST Robotics! If you are a FIRST participant considering apply for SHAD, do it! It doesn’t matter how unconfident you are you’ll get accepted, still apply – because I promise you’ll never know what will happen or where things will lead. Just look at me, for instance! If you are a FIRST participant who had never heard of SHAD until you read this article, please consider applying to SHAD because you won’t regret it. I guarantee you that if FIRST can change your life, SHAD can too. Exactly, like it did for me.