FIRST Robotics Canada interviewed Vanessa Vakharia, The Math Guru, 2016 participant on Canada’s Smartest person, and one of today’s most notable young entrepreneurs. She had some very inspiring things to say about how she started to love MATH!

FIRST Robotics Canada: How did you become The Math Guru?

Vanessa: How did I become The Math Guru…what a question! Honestly, the truth is that I became The Math Guru by NEEDing a math guru! When I was in high school, I HATED math! I wanted to be an actress and marry Keanu Reeves (still do, btw), and I was convinced by my teachers, peers and popular media that artsy people were SO not ‘math people.’ So, it always made sense to me that I didn’t like math—I was an artsy person. Well, after years of believing this, my parents sent me to an alternative school. This school was magic—there was no such thing as a ‘math person.’ People were just…people. My math teacher that year helped me find my inner mathematician, and I’ve never looked back! So how did I become The Math Guru? Well, after getting a degree in commerce, a diploma in design, my teaching certification, and a Masters in Math Education specializing in Feminist Studies, I decided that I wanted to do my part to make sure that the stereotype of what it means to be a ‘math person’ was eradicated once and for all. I wanted to show kids like me that ANYone was capable of doing ANYthing, that the only barrier to tackling math is really just the belief that you CAN’T tackle math! That’s it! So, I started The Math Guru, a boutique math & science tutoring studio that looks nothing like you would imagine a math & science tutoring studio could ever look like. And that’s the whole point.

My goal in life is to create a world where the term ‘math person’ no longer holds any meaning; where that concept no longer even EXISTS because it’s stripped of its media-inflamed connotations. In addition to having a space where me and my tutors can teach and inspire the hundreds of kids who walk through our doors every week, I also run seminars and workshops worldwide in order to examine the effects of the media on our perceptions of what it means to be good at math, especially for women. I speak to students, teachers, parents and corporations about their roles in helping rid this world of these stereotypes which are harmful to us, our children, and our future. That’s basically my highlight reel—I guess that’s how I became and am continuing to become, The Math Guru!

FIRST: What do you love about math?

Vanessa: What’s NOT to love? Honestly, I see it all the time—people don’t like math for two big reasons: 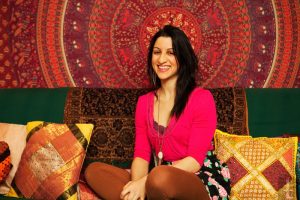 FIRST: We believe it’s cool to be a math guru! But how can we convince others of the same?

Vanessa: Our whole lives, we’re told what it means to be ‘cool.’ From the toys we’re given when we’re kids to the movies we watch when we’re teens to the mass media we buy into as adults—we’re sold a version of ‘cool’ which for women, does NOT include mathematical intelligence. You know what? I’m here and YOU’RE here to reclaim and redefine what ‘cool’ is! And THAT, my friends, includes being a math guru. What’s NOT cool about loving the mystifyingly beautiful laws of the universe? What’s NOT amazing about being inspired by the thought of solving problems, dismantling puzzles, discovering solutions which don’t even exist yet? What’s NOT totally incredible about being smart, knowing things, and sharing that knowledge with others? Being a math guru is literally the coolest and the media’s portrayals of intelligence as uncool is just one of those things that we have to fight against but it’s a fight worth fighting, and I’m totally ready to take it on—are you?

Vanessa: I get asked this question a lot because, let’s face it, the only ‘careers’ we see the media attribute to an enthusiasm for math involve prodigy-level rocket scientists going crazy due to their intelligence-induced isolation. It’s a sad scene. The truth is, if you love math and are good at it, the world is your oyster! Some of the cool ones that come to mind: 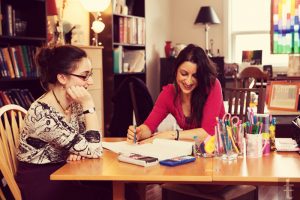 FIRST: What advice do you have for those who want to improve their math skills?

Vanessa: It’s always tempting to give up when something just seems way too challenging—we all feel that way sometimes! My biggest piece of advice is to learn to see your struggles as obstacles, not absolutes! There is nothing more rewarding than working hard to master something and actually seeing that hard work through until it pays off. Math can be challenging but so can life! Do you want to be the type of person who cowers in the face of challenge? Or the type of person who does everything they can to conquer that challenge? I think we both know the answer.

Once you’ve decided that you CAN DO THIS, you’ve got to get the right tools and game plan on your side. Here are a few practical tips to help you improve your math skills:

Thank you for your inspiring words, Vanessa! Such great advice for students to learn to love math and purse a future in mathematics!