Microsoft has generously offered grants for teams across Canada in 2017.During the months of January, February, and March, we’re highlighting Microsoft-sponsored teams!

This week we talked to 5672, a First Nation team from Wikwemikong Unceded Territory, Manitoulin Island. 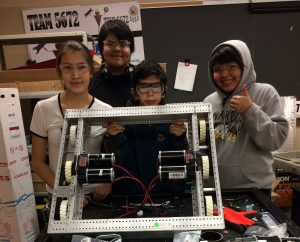 FIRST Robotics Canada: How do you feel about the 2017 game?
Team 5672: We are excited for Steamworks 2017. Many of our team members are new and have never even seen a FIRST Robotics Competition event. The team has been putting in long hours, reviewing the game manual, field videos, and trying to sort out an approach that will both suit our skill set, and challenge us in our build. The game necessitates teamwork, alliances will be very important. It is also a game of volume and timing.It will be important to finish the build with enough time to have drive practice.

FIRST: What about the game are you most excited for?
5672: The human player on the field in the airship adds an element that we have not seen before. I think we will see some spectacular high goal scorers. The scouting and discussions around strategy will be interesting, as teams sort out their sense of their own strengths and how they might be supported by others. The atmosphere in the stands will be exciting. The gracious professionalism of the pits is also amazing to experience.

FIRST: What makes your team unique?
5672: We are an all First-Nation team from Wikwemikong Unceded Territory, Manitoulin Island. This is our third year. We started building with borrowed hand tools on a bench at the back of our science class, and material from our local recycling station. That year we were alliance captains, and received the FIRST Rookie Inspiration Award. We have grown, and challenged ourselves each year. We always have more young women than men, with the women having leadership roles in all aspects of the project. The team sees itself serving as role models to promote STEM for First Nations students. We believe that on-reserve First Nations students should be involved in mathematics, science, and the imagination and innovation economy.

FIRST: What events are your team attending this year?
5672: We will be attending the Oshawa event at Durham College from 3-5 March.  We will also attend the North Bay event from 6-8 April. 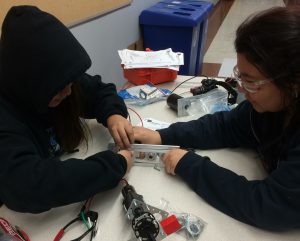 FIRST: How has the Microsoft grant helped your team so far?
5672: The Microsoft grant enables our team to compete at the two district events this year. Our team does not have many industry connections. We live in a region with almost no corporate presence. Distance and travel are a significant barrier for our team. We are in an area with great socio-economic need. Without the generosity of Microsoft, our students would not be able to fully participate. Microsoft’s generosity helps to level the playing field for our students.
Thank you, Team 5672! We’re looking forward to seeing you at the competitions.
Tags: Microsoft, Team 5672

The Journey of a Champion: An Interview with Aecon’s Sangeetha Vigneswaran