Microsoft has generously offered grants for teams across Canada in 2017. During the months of January, February, and March, we’re highlighting Microsoft-sponsored teams!

We talked to Hephaestus Robotics Team 6390 in Surrey, BC, and asked them a few questions about the season so far. 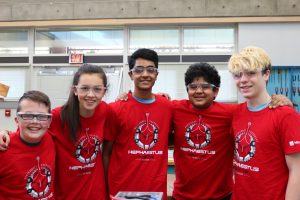 FIRST Robotics Canada: What are the biggest challenges your team has faced this season?

Team 6390: Our biggest challenges are related to managing the size of our team.  As a Rookie team with 35 members, we have had to work hard to find roles for each of our students to keep them occupied and motivated. The size of our team is encouraging as it means we are providing a vital need to our students and the interest our team is generating indicates that the size of the team will likely increase in the years to come. The greatest challenge associated with a large team is the additional costs associated with having a large team. We feel it is important to be inclusive and provide each of our students with the opportunity to experience attending and participating in the Western Canadian Regional FRC in Calgary.  Ideally, having an event in BC would be an ideal way for BC teams to grow as more students would be able to participate, and have access to see the event in person, hopefully encouraging new teams to form, and increasing a FIRST presence in the west.

FIRST: What do you think of the 2017 Steamworks game?

6390: The consensus from the team is that they think the Steamworks theme is “cool.” They seem to like the connection to the historical aspects of the industrial revolution. The theme also lends itself well to the mechanical connection to robotics by incorporating the gears (cool game piece), and of course we love the rope climbing challenge. Everyone we meet is baffled by the fact that we will be attempting to make a 120 lbs robot climb a rope and hang there.

As a rookie team, we appreciate that this year’s game challenge appears to be doable and not as intimidating as previous years. We really appreciate that the rookie-kit-bot is enough to compete this year and we won’t be limited by the fact that we don’t have access to high-tech equipment to machine-customize our parts. We really like the additional human player as this will make the game more engaging, and allow one additional member to participate on the field.

FIRST: Can you give a few examples of team members who have been truly impacted by robotics and being a part of the team?

6390: One of our female grade 10 students says she had no idea what she wanted to do as a career path, but since joining the team she is thinking about going into sciences—something she had never considered before.

Our International students say that robotics has given them a place where they feel they belong at our school. They feel valued and included in something that makes them excited. They also appreciate that they can practice their language skills in a safe environment and their confidence in speaking English has grown through their involvement in the team. Their circle of friends has expanded since joining the team, as well.

Our Grade 8 students commented that they appreciate being part of something that involves working alongside older students. They said they feel very supported and enjoy working together as a team. One student said, “usually I am an individual person (introverted), I’m learning to be more extraverted, developing my skills as a public speaker, getting comfortable approaching people with all of the practice I am getting talking about robotics and STEM.”

One of our grade 12 students is planning on becoming a programmer but she never had the opportunity to learn C++ or see her programs come to life before this year. Having a practical application for her to learn and develop her skills has been an experience unlike any other she has had throughout high school. She wishes we had started the program earlier but is thankful she has the chance to participate this year. In addition, she is very appreciative of the amazing scholarship opportunities that FIRST has available.

Another student said that “non-techie kids on the team are now using applications that they have never used before,” and developing skills that they would’ve been too intimidated to try on their own without the support of their teammates.

“We can finally compete as a member of a school team—compete with our brains,” as opposed to their athletic abilities (or lack thereof). 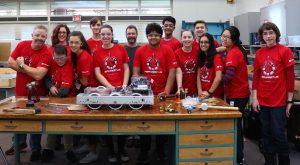 FIRST: How has the Microsoft grant helped your team so far?

6390: The Microsoft grant money is the only reason we could establish a team this year. Without the grant, we wouldn’t have been able to raise the funds in time to register our team, let alone afford to purchase all the tools and parts we required to build the robot. Unfortunately, it is difficult to source FRC materials locally and as a rookie team we do not have local partners to machine our metal parts for us so we have to purchase prefabricated items though AndyMark which means international shipping costs.

Having a supporter such as Microsoft has been a tremendous value to our team in more ways than we can express. The Microsoft brand is one that we are proud to represent and it has opened a lot of doors to our team through association. When community members, school district officials and members of our school see that Microsoft sponsors us, it grants us a legitimacy and inherent level of respect. On our outreach visits to elementary schools, the students never fail to point out the Microsoft logo on our t-shirts and are very impressed that we are associated with the Microsoft brand.  Some of our Microsoft grant money was used to purchase a LEGO Mindstorm kit so we can develop an FLL team for our younger students and incoming grade 7 students.

In short, Microsoft has made it possible for us to build a strong foundation to help ensure that our team will be sustainable for years to come. There are no words to express our gratitude to them.

Thanks Team 6390! We wish you the best of luck this season. And thank you, Microsoft, for supporting FIRST Robotics Canada teams.

Mentorship: The Guiding Star – An Interview with Emily Chung